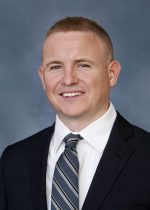 Michael J. Dolan is a lifelong resident of Connecticut who was born and raised in New Haven County. Attorney Dolan primarily handles the firm’s personal injury, wrongful death and medical malpractice cases.  Attorney Dolan has been named to the National Trial Lawyers Top 40 Under 40 for the State of Connecticut, he has been selected as a New England Super Lawyers Rising Star in the area of Personal Injury Law for 2017 through 2022, (each year, no more than 2.5% are named to the Rising Stars list), and he received the 2017 Connecticut Law Tribune New Leader in the Law Award.

Attorney Dolan received his B.A. from Boston College, graduating with honors in three and half years.  He received his law degree from the University of Connecticut School of Law.  While in law school, Attorney Dolan clerked for the Bridgeport Superior Court and the Regional Family Trial Docket in Middletown.  He also interned at Jacobs, Grudberg, Belt, Dow & Katz and for the State’s Attorney’s Office in Middletown.

After graduating from law school, Attorney Dolan worked as an associate attorney at the firm of Sinoway, McEnery, Messey & Sullivan, where he handled a large portion of the firm’s soft tissue motor vehicle cases. Prior to forming Dolan Injury Lawyers, Attorney Dolan was employed as an associate attorney at Jacobs & Dow, where he worked on complex automobile accident cases, medical malpractice cases, and wrongful death cases.

Attorney Dolan serves on the board of the Yale Sappern Memorial Fund.  He resides in Milford with his wife, Alyssa, and two children, Cora and Williiam.